Conversational AI in Banking and Finance

Conversational AI is offering new ways for consumers to interact with their banks or their finance. Therefore financial institutions have to reimagine and reinvent their offering, services, and processes to address these new use cases.

We discuss with our panelists some of the tactics and techniques they have been using to embrace the new trends of Conversational AI.

Jen’s work has most recently focused on Help and Search, in support of banking customers who encounter a problem or challenge with a Scotiabank product or service. She also has experience with chatbot design across industries.

David is a tech enthusiast and thrives in building frictionless and personalized experience for customers. David has a lot of experience with Voice technology, from the voice assistants that many of us interact with to the less public familiar IVR.

Zach is an entrepeneur who has founded several companies and is now focusing on voice interfaces and how they could be used to solve real world problems.

We Thank Them For Supporting This Event

Connected is an end-to-end product delivery firm. With a mission of building better products fro their clients, Connected brings together the best in agile software development, human-centred design, and product and business strategy, making sure that insight feeds execution at every possible step.

Check out their services here. 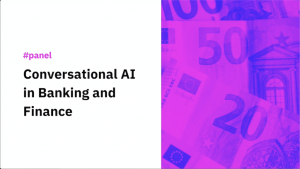 Do you think customers will naturally transition into using voice within the banking industry? Or do you think they're a potential barrier? When it comes to changing people's habits and perceptions?

Emanuel: You have to provide a choice. I think certain people are not going to want to gravitate to one channel because of either trustworthy trust factors or whatnot. I think even with the IVR systems, for instance, like we have conversational in place, but we do definitely also have a fallback touch tone version and plays because sometimes people just don't want to spit out things in public. So we have to consider privacy issues and being able to navigate in other means. So I think it's all about understanding the needs of the user providing options that would be highly likely in that scenario, and giving them those options to really navigate themselves. I think if you start limiting, you're just going to detract people from using the technology itself.

Do you currently user test the tone of voice of conversational interfaces? What guides the personality of the chatbot that interact with customer today?

David: Getting into tone, it's probably basically the styling of the voice within the voice conversation. I think it's quite an advanced topic that gets the small adoption into our voice interfaces. I think many of the Google Home and Alexa interfaces enjoy some of the capabilities. I can comment about what we do what we don't, but it's definitely something groundbreaking, that many should look into. It gets into with synthetic voices into branding, that basically associated with the tone and pose and how fast you speak and all those items, we can definitely customize the voice experience and mimic how people speak to look at more human.

David: When we talk about personality, there are lots of aspects and they all related to branding and the image from the creator's perspective that we want to create behind the company and how we want the customers to perceive the different social aspects that might be included here. So for example, gender agnostic, so do we want to perceive the bot to be female or male? How do we want to perceive them? We want that creature or identity to be playful, but at the same time may be serious because it's a financial institution. And there are many aspects of it mentioned in what we consider to be personality.

Tim: How do you handle accessibility to non-native English speakers in a city as diverse as Toronto? How do you rich people who aren't proficient in English? So who wants to pick that

How do we inform the users what the capabilities of the voice assistant chatbots are so that the users know what to expect?